ROVsim² Pro puts control of virtually every facet of the simulation in your hands. You can adjust the ROV’s physics and dynamics, change the video overlay, enable options such as casualty simulation, and adjust the environment. With just a few clicks, the video overlay as well as physical and dynamic operating characteristics of the vehicle can be changed to simulate a wide range of ROVs. And with just a few more clicks, the environment can be changed from clear and tranquil to zero visibility with dangerous currents. No other ROV simulator on the market offers this much flexibility at this price point. 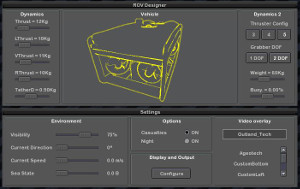 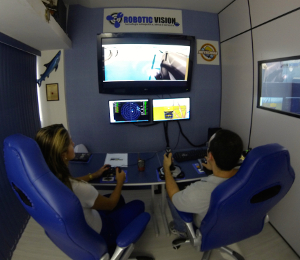 ROVsim in action in Brazil

The Environment settings allow you to change the mission Visibility (turbidity), Current Direction, Current Speed and Surge. Surge simulates the cyclical motion of waves in shallow water. The Options settings allow you to turn on various optional features. When Casualties are turned on, ROVsim² Pro will simulate various equipment failures in response to hard collisions and excessive pull on the umbilical.
The Video Overlay panel allows you to choose from a list of available configurations. This way ROVsim² Pro may be used to simulate a number of manufacturers’ systems. Additional overlay configurations as well as custom configurations may be added. 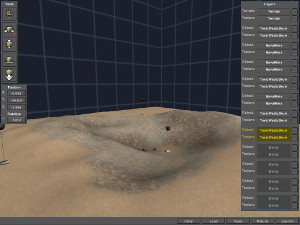 Using the mission editor you are able to create a new custom mission environment or launch a previously created one. Design your own mission by importing your own models and textures or build one using the supplied terrain, models and textures. Models that are imported can be moved, rotated or “dropped” on to the terrain’s surface either interactively or by entering a position on the keyboard. Custom Mission Definition Files can even be created with a text editor or an external application. The Custom Mission Designer supports 3D models in .OBJ format and textures in .PNG or .JPG formats. 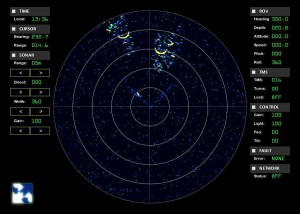 The included Scanning Sonar Simulator works with all ROVsim² Pro missions as well as any custom mission you may design in the Custom Mission Designer. The sonar simulator is so accurate, it can even pick up small contacts, such as the ROV tether, fish, as well as details of sonar targets, such as holes and bumps. The sonar display includes a full instrument display showing status of the cameras, heading, depth, altitude, speed, etc.

Environment (current, visibility, etc.) and casualties can be controlled with a separate USB keypad, computer or using a smart phone or tablet.